Driftwood Art and the Writing Room

After my dear friend, Lisa, told me she was going to drive down here if she didn’t see any pictures of upstairs, I giggled quite hard, actually, but I also realized I began talking about this back in January.  For clarification, it’s July.
So, even though it’s not finished, we are beginning to accessorize and actually “pretty it” now, so I’ll happily show you a couple of now pics….because they’re certainly not “after” pics.
Here’s the side of the writing room that holds the daybed.  Again thank you guys so much for your sweet comments and suggestions!! 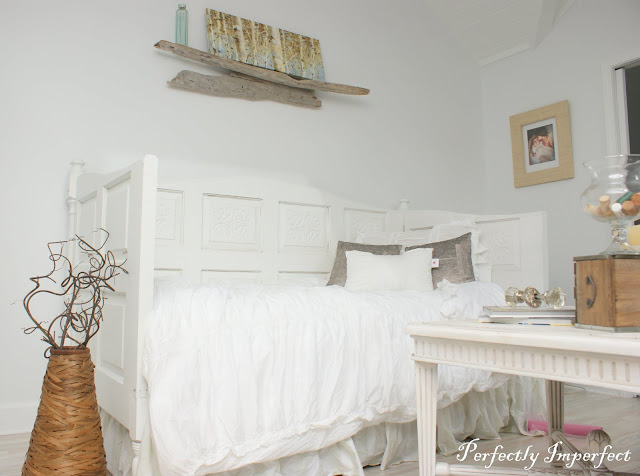 See what I mean?  I’m beginning to get some accessories, but far from finished.  But…I don’t want to apologize for its sparseness too much, because I am really going for a clean and uncluttered look in here.  I tend to be such a collector and shelf-crammer…I would love this creative space to be a haven for me….for it to transport me somewhere else.
Ava had a hard time not trying to steal the spotlight, though. 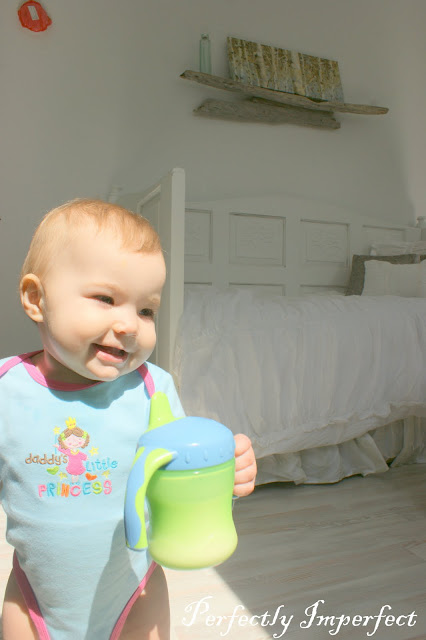 She got super excited when she stepped into the sun from the skylights.  In and out, in and out.  So cute. 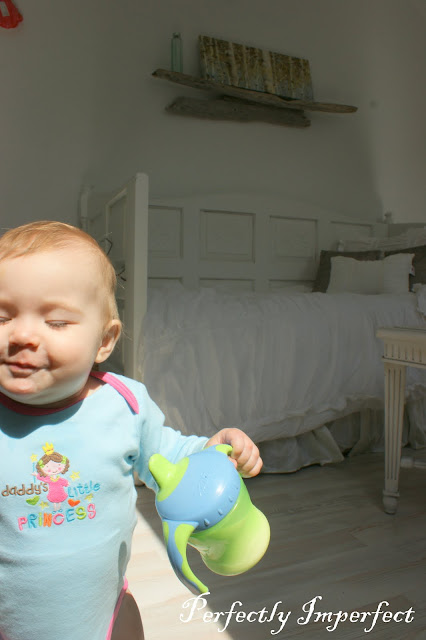 You can see what I decided to do with the bed glazing.  I got out my tiny artist brushes and painted only inside the scrolly grooves, and wiped it off with a wet cloth to get most of it off.  And I usually hate it when people say this about glaze, but…it did look dirty.  And Matt hated it.  So I felt like in all fairness, after the work we had put in, I wanted to LOVE it.
I just chose to leave the details white, but glazed the paneling grooves…and it really does draw the panels to your eye. 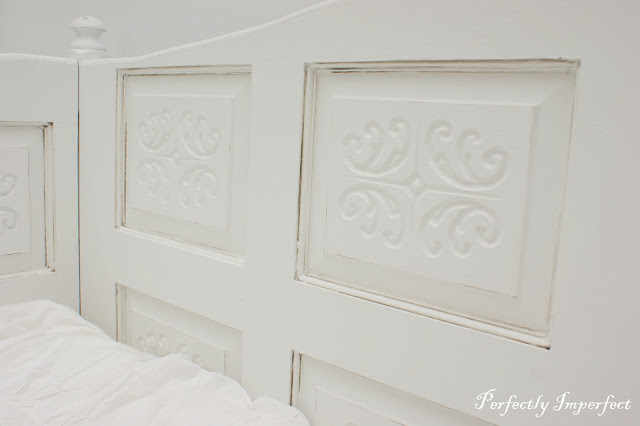 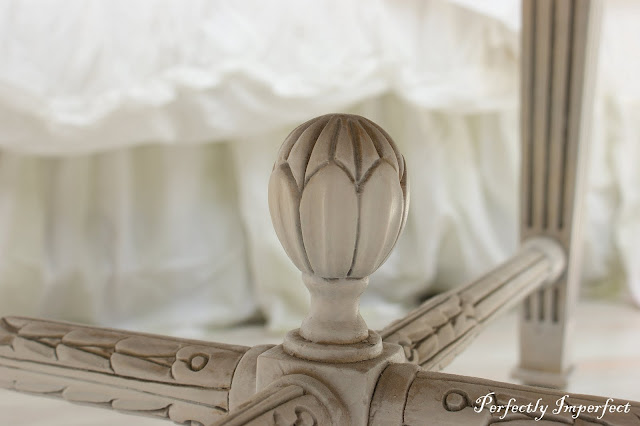 I’ve also added a bedskirt since we last chatted.  I found one I had lying around, from the shabby line at target I had purchased in college.  It was a green and white stripe, and I wasn’t positive I wanted anything but white bedding, so I just flipped it over and presto!  Subtle, tone-on-tone, stripes.
My favorite addition?
This driftwood art…or shelf, really, but it feels like art to me. 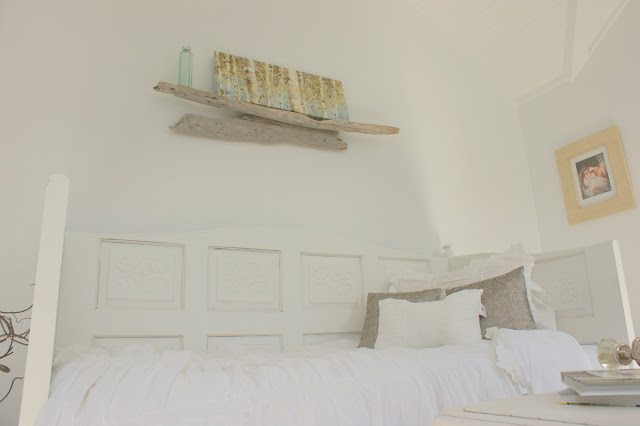 My good friend Lauren inspired this a while ago, when I saw her use a piece of driftwood and turn it into a towel rack in her bathroom with screws and hooks.
Enough time has passed that I forgot about it, but I had in my head I wanted some driftwood she brought me from Mobile above the daybed. 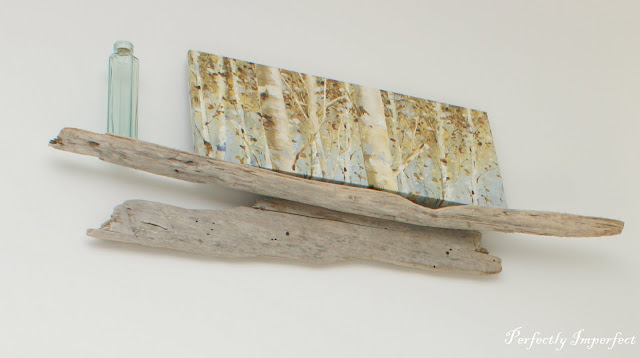 And when I found this canvas at target clearanced for $13, I had to have it.  I love the colors, and how calming it is…plus, I love birch trees.
I don’t have any “before” pictures, or “during” pictures because we were staring at the wall, and I said “where should I start?”  Matt just casually looked over and said, “what if we turn that driftwood into a shelf for your art or whatever,” like he had been hiding that up his sleeves the whole time. 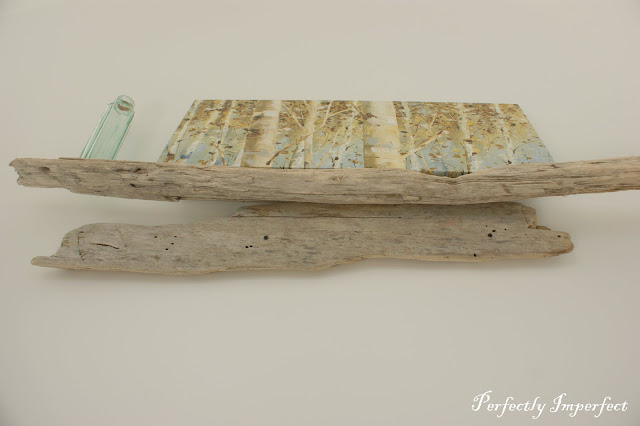 It’s a huge wall, so I doubt this will be the only thing that’s hung, but for now, again, I love the clean and spa-like feel I’m getting.   I also wanted to hang it high on the wall to draw the eye up, and I might add some knobs to the front of the shelf to hang a piece of jewelry, etc.
As far as the “how to”, we just used 2 3 inch drywall screws to attach the two pieces together and 2 to attach it to the wall.
And here’s my view when I’m laying in the daybed…not that I’ve had the chance to do that besides snapping this photograph. 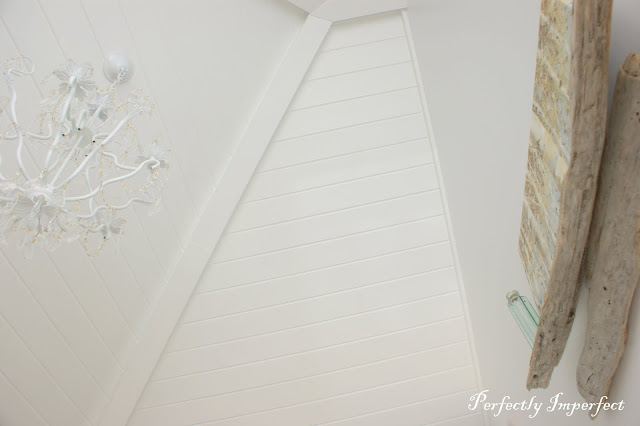 I’m so pleased with how it’s turning out!  This, I’ve realized, will be a work in progress, as time and budget have pretty much disappeared, but I’m looking forward to the process. 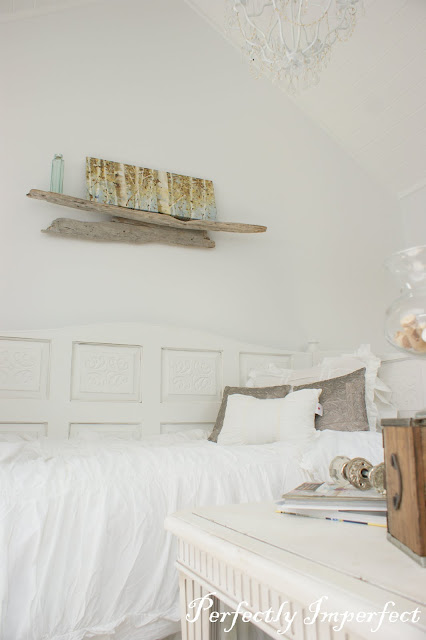 On my wishlist for this side of the room:
A side table…or even 2, not matching
A glass lamp with some kind of grey shade, I think
some french grain sack pillows for the bed
For Matt to move up my french chair (because I’m scared I’ll take out the wall)-
That’s it for now…who knows what I’ll add to that list.
🙂

You probably won’t for another 4 months.  Just kidding!  But you know, I’ve learned my lesson about mentioning projects long before they’re completed…I’m too impatient to wait for the final reveal!

The bathroom should be finished in the next couple of days, so maybe you’ll get to see that soon.  Oh, and I’ve got a house tour coming soon that you won’t want to miss!
And don’t forget the linky party coming up…I’ll choose a date to begin in the next couple of days, and then it’ll be up to us to spread the word!
Have a great Monday, girls!
🙂
**linking to great parties found in my sidebar and under friends and inspiration**