I know you’ve heard so much about our attic renovation…I decided it was time to give you a bit of an update.
We are in the throws of construction, so you won’t be able to tell a lot, but you can get a general idea.
Let’s focus on one room at a time, shall we?
The writing room is mine, all mine.  Matt let me make every single decision alone (well, mostly) and I am SO thrilled with the direction its heading!!  I’ve told you before, I think, that I’m going for coastal, elegant, and casual…casual elegance with a coastal flair.  Try saying that 3 times fast.
The color palette is white, white, and white, with touches of the colors of the ocean…a pale blue writing desk and a turquoise dresser are the focal pops of color…and i’m actually waiting to see how those look in the room to decide if one is getting a new coat of paint.
Anyway….wanted you to see some inspiration photos I’ve had in my head while designing the room…..I don’t know where they all came from (sorry!), but the important thing is I’m not claiming them to be my own, right?? 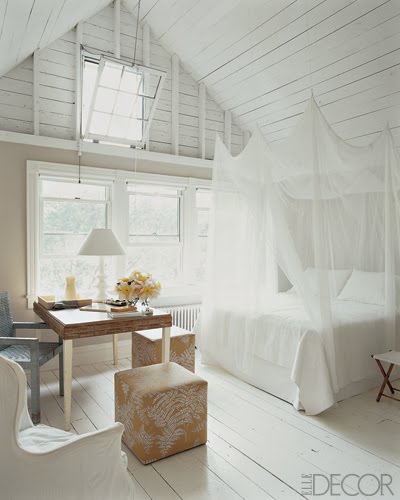 One of the most important parts of the room is the ceiling…it’s an attic, after all.  The ceiling is essentially the wall in my room, so I wanted it highlighted with wood…white wood tongue and groove. 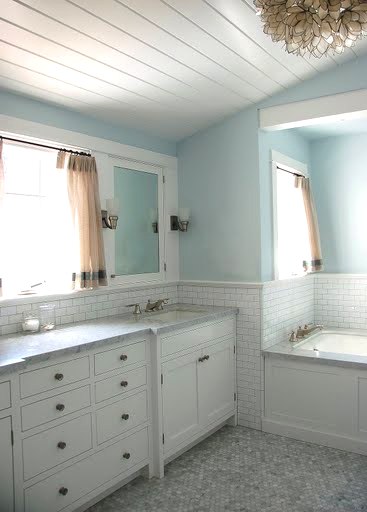 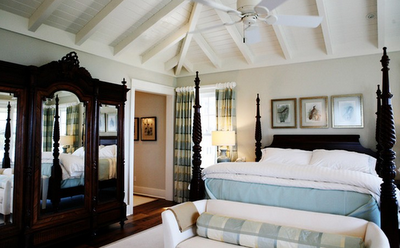 We all know when decorating with white, texture is key…the ceiling/wall planks will bring so much texture and depth to the room.  I had considered white-washing, but the floors are somewhat of a washed white, so painted white planks, it is. 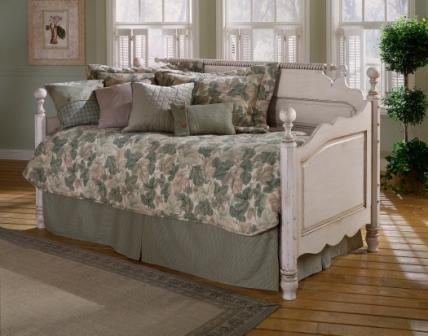 Okay, now I hope this doesn’t offend anyone….but I’m going to suggest you ignore the bedding, and turn your attention to the daybed.  This was the bed I was going to buy (for $800 I might add), until I decided to build my own.  I know, you’ve yet to see proof, but it’s coming soon!!  So now, it’s the inspiration…sort of.  The lines won’t totally be the same, but I love the chunky yet feminine feel, the distressing and glazing.
For the bathroom, this photo below was the design inspiration… 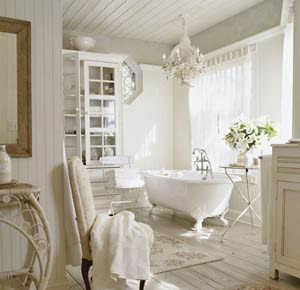 I love that it’s romantic, but not too sweet.  Two must-haves for me were the chandelier and the clawfoot tub.  I must admit, the tub was the splurge (even at a good deal, it was definitely more than the daybed I’ll build for less than $100.)  After researching how much it would cost to reglaze a tub locally, it was going to work out about even…we went with new.  Where the “bedroom” will be all white, the bathroom will be a pale blue-grey.  That color will also be in the stairwell. (The stairs are posing a bit of a dilema…they were already there, so the question is do we add more pine (because the unfinished ones are very beaten up and don’t meet the walls) and paint/stain or do we bite the bullet and purchase unfinished stair treads?  Plus, there is a “flow” issue with the finishes…I feel another post coming on!) 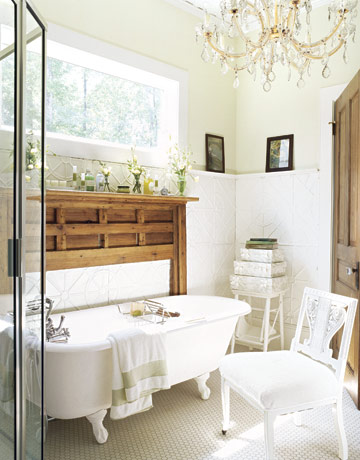 Again, I’m just drawn to rooms that are decorated elegantly, but feel casual and comfortable.
So, let’s take a look at where we are during the process….
You ready? 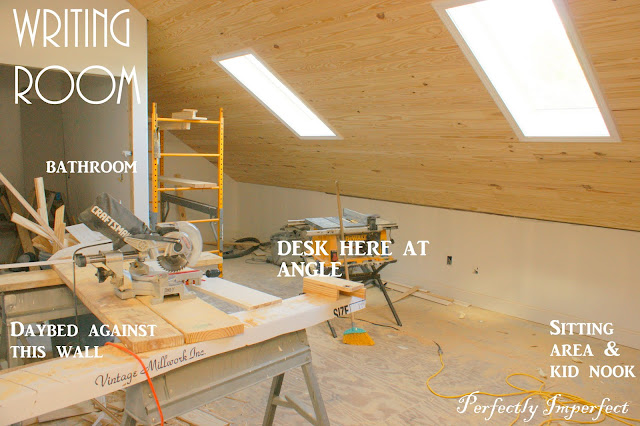 I know, it’s a long (very long) room.  It’s actually quite difficult to get a picture to capture the room in its entirity.  So you know me.
I took several. 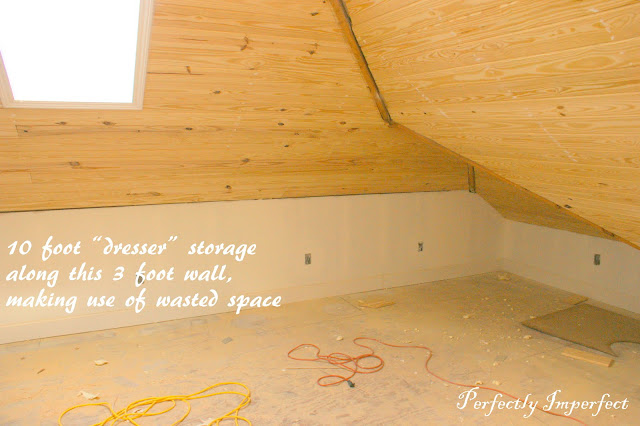 And while it’s nowhere near done, I love that the skylights are in and the ceiling is ready for painting.  Ahhh!! I’m SO excited!
I really do envision that shorter space as a little nook for the kids. I also might put up a “fabric wall” to act as a make-shift closet/storage. 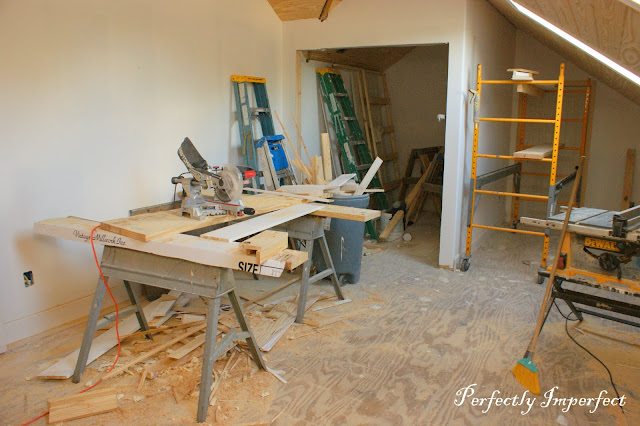 From another angle.  The wall to your left will probably hold the daybed…I don’t know…we’ll see when we move in. 🙂 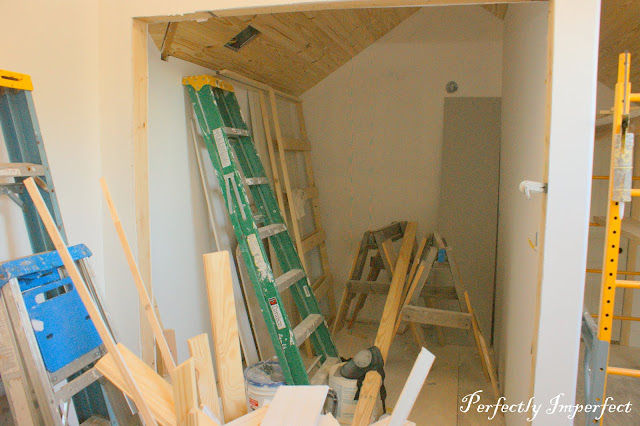 The bathroom…..it really looks small, doesn’t it?  It’s not huge, but it is a good size.  It will comfortably hold the clawfoot tub, toilet, vanity and possibly a small chair.  Definitely big enough. 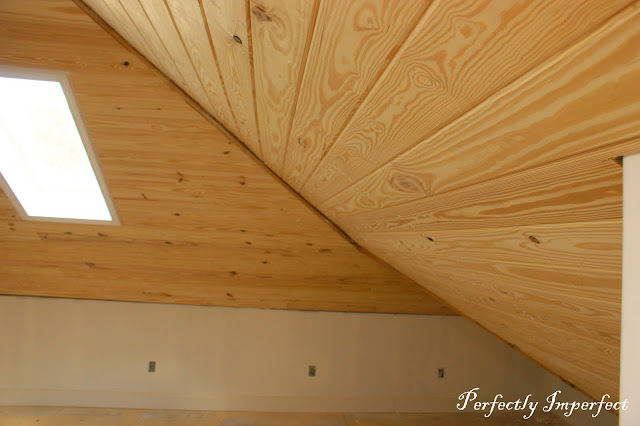 We actually ordered a faux wood ceiling, but when it came in, we realized it was not laminate, but basically paper.  You know, like the popcorn stuff.  Grayson could have looked at it and knocked a chunk out of it.  We went with pine.
Okay, tell me what you think!!!  Did you imagine the space would look like this?  Can you envision me typing away to you sitting in there?
I will be, I promise.
🙂